Continuing from part 1, this is the end of our second week visiting Istanbul. Elif and Mina arrived on October 14 and we all went to Ayvalik on October 15 to return to Istanbul on the 19th.

As planned, I dropped Jan off at Mehmet and Isin’s house where the girls would go out while the guys were busy eating kebabs and talking about the good old days. After dropping Jan off, the driver took me to the place which turned out to be one of the branches and not the right one.

I did not know that the kebab house was almost like a chain and I went to the one I was told. It turned out that Suleyman and the others were at a different branch. I had to get a taxi this time and found the other place. We were able to meet at a kebab house with Suleyman, Mehmet, Husam, and Mustafa after a little confusion. I last saw them back in 2017, and we enjoyed some good food and reminisced about the old days. The good old days.

A few days later, uncle Sureyya invited us to lunch at Buyuk Kulup, a very large and famous club in Istanbul. That Saturday, before joining my uncle and Eser, Ergun took us to see Binnaz’s gravesite. Karacaahmet district is well known as one of the largest cemeteries with its typical cypress trees. Coincidentally, I was born in a house not far from the cemetery. The chauffeur drove us on the narrow paths inside the cemetery and we started walking the narrow paths between the graves.

Binnaz’s grave was covered with plants but with no walls or a headstone as they were waiting for the soil to settle. The end of the path leading to the gravesite was not paved but Ergun hired someone to pave that part as well. The good weather made the emotionally difficult visit, physically easier. In a way, being next to my sister’s grave brought closure to our loss. We looked around, took photographs of the site, and asked Ergun to take a picture of me and Jan behind the grave and bid our farewell to Binnaz once more. Rest in peace dear sister.

From there, we were driven to the lunch place, Buyuk Kulup where Eser was waiting for us. Again, the nice weather allowed us to enjoy lunch in the open air in the garden of the club. The umbrella, if it can be called that, covering the area was enormous as it covered at least a third of the area with about a dozen tables and about 50-60 people under its shade.

While we were at our table and chatting with Eser, we saw uncle Sureyya walk in with sure steps and sturdy as ever. We enjoyed the good food, the conversation, talking about the old days as well as what was going on then. And, soon it was time to say goodbye. We hugged, kissed, and left the club. The date happened to be Ergun’s birthday, October 12.

We had arranged to meet with Mehmet and his family, the kids, and the grandkids on October 13. The day before, I learned that one or two of the grandkids were sick and I asked them to stay home as I did not want to be exposed to germs. Mehmet asked Suleyman and Samime to join us at Fenerbahce Dalyan Club. As a surprise, the older son of Bahattin and Hatice, Oyku happened to be in Istanbul and he joined us as well. All that time, the weather had been very cooperative and we all enjoyed sitting outside under some shade. We left around 1:00 PM as there was a business meeting related to ASKEV.

In the afternoon, there was a brief business meeting related to the Web site of the ASKEV Foundation started by Binnaz and Ergun a couple of years ago. We met and discussed the possibilities and we transitioned to a party Ergun had organized for his and Jan’s birthdays. It coincided with Jan’s birthday, a day after Ergun’s, and many people who worked for and with him were invited.

The food, the drinks, the desserts, and the birthday cake were as good as visiting and seeing the people and we thus finished our second week in Istanbul. The next day, Elif and Mina would arrive and a new and our final week would start. That’s for the next post.

During our stay in Istanbul, we also managed to visit our friend Oya a couple of times. She was undergoing radiotherapy and feeling quite tired. Since she tolerated the early sessions quite well, the doctor decided to increase the dosage of radiation and reduce the number of sessions. As we were getting ready to return home, she was done with the round of radiotherapy sessions and was waiting for the immunotherapy to start.

Since then, Suleyman and Cem saw their doctors and will soon undergo open-heart surgery. Suleyman will have a cardiac bypass and Cem will have that and an aortic valve replacement, probably as you read these posts. We wish all of them a speedy recovery and many more healthy years. Get well soon, Cem, Oya, Suleyman, all of you! 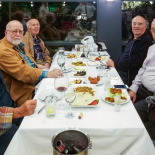 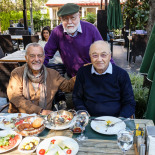 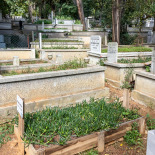 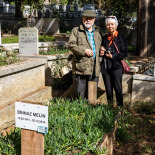 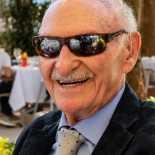 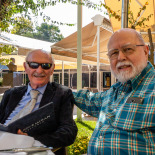 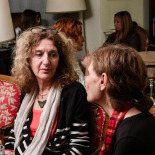 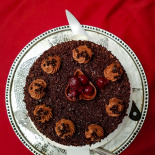