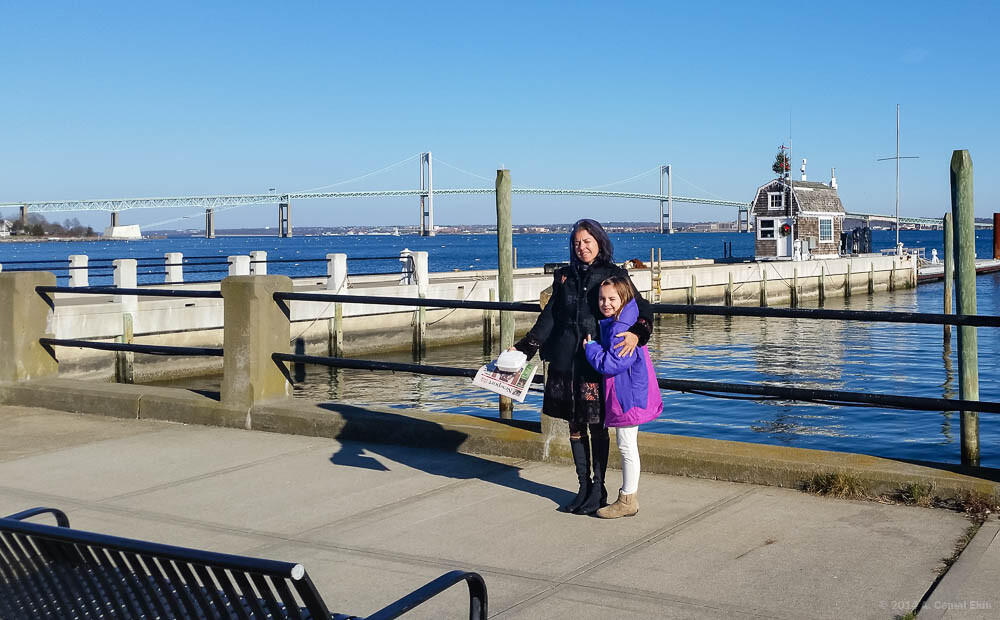 The Day After Christmas 2014

The day after the Christmas day, I told everyone I would drive them somewhere for lunch. As we traveled we decided to go to a deli in the center of Jamestown. (For those not familiar with Rhode Island, Jamestown is an island town that connects the land to Newport.) The small deli makes very good sandwiches, we enjoyed our favorites and strolled around the pier. Mina wanted to walk on the beach and we went down the street where the sidewalk connected to the sand. Along the way, Elif and Mina enjoyed walking on the low wall that separated the sidewalk from the beach. The beach was full of interesting stuff, sea-glass, flat rocks, shells, and the girls gathered enough to take home. Then we drove back as Mina took a nap. Later on, I dropped Elif in Providence to meet with one of her old friends. When I returned I made a plan for me, Mina, and Nana. We would go out and see the light show a house puts on to benefit the Make A Wish Foundation. It was a short drive and the light show happened to start with Mina’s favorite Christmas song, Dominick the Donkey! We stayed there for a while, Mina put money in the collection box and I started driving towards the Big Blue Bug which gets decorated for the holidays. (It is an outdoor ad for an extermination company, a big blue termite). We saw that on the way to India Point Park and a second time as we drove back.

On the way back Nana ordered pizza from Little Johns to be ready in 20 minutes. Mina had collected a lot of loose coins and we took them to a supermarket on the way back where they have a counting machine. Mina dumped the coins and got a receipt for $15.65. She got reimbursed for the coins at one of the checkout counters and we made the last stop at Little John’s where Nick greeted us. The pizzas were ready, we got them and rushed back home. Mina had two full slices of her pizza, and we both topped it off with coconut gelato, yummy!