Look at a photograph, any photograph; look very carefully for a few minutes. Now, put it away and tell a friend what you saw (or write a comment here). The moment you start speaking or writing you start translating the visual to verbal, or reading a photograph in a sense. This, in and of itself should be a noteworthy realization for most since we tend to separate photographs from words, inappropriately I might add. Hard to think without words?

The more important question to ponder about is what kind of words you use to describe your experience of looking at that photograph. Write down the words and group them into nouns, verbs, adjectives, adverbs, etc. Then, think about what you are conveying. Are you talking about the photograph “being of” something or “being about” something?

This brings us to another very important realization that photographs are inextricably tied to reality. They are always “of” something but the purpose of the photograph does not always end at the point of being a signifier of an object. Photography seems to be cursed with this tie to reality which often gets in the way of fully appreciating them. Viewers looking at a painting of a heron typically stop at the content, form, technique level and talk about the formal elements of the painting as well as the technique in creating it. The depictive content of the painting seems to come last, let alone offering additional information about the mating rituals of herons. Similarly, in viewing a sculpture nobody asks: “what is it,” or “who is it” but enjoy the work with its material, form, execution. The reason may lie in the source of the artwork in painting and sculpture which is in the mind of the artist even when the artist is looking at a landscape or a model. Painters and sculptors are not held responsible to link their work to reality. For photographers, that is the first hurdle to go over since all photographs start with reality as we point our cameras to something, anything.

What, then, is a reasonable way of looking at photographs? There are books, a collection of photographs with this title; I will not repeat what the experts have said about this subject. If you are interested in exploring this matter further, here are a few good starters, you may have your favorites too:

I would like to offer three fundamental characteristics of photographs, or art in general, and add to that one more. This will create a triangular pyramid. I suggest that we consider this structure being connected by flexible joints and hovering somewhere inside it will be our own view of the work under consideration. The elements of this will be:

As we look at a photograph, this pyramidal structure will sway right-left, up-down and form our perception and understanding of the photograph.

As mentioned earlier, all photographs are of something, which makes up part of the content. When you look at a photograph of a bird you know that it is a “bird”. That is what Szarkowski calls “The Thing Itself” and is close to what Shore identifies as the “Depictive Level”. Many photographers I know can even talk about the season in which the bird was photographed, its gender, whether it is in a mating season or not, and many other fine details about the bird. The other aspect of content relates to what the photograph “is about.” The photograph, in addition to being of a bird, may also be about the human encroachment in nature, the sublime qualities of nature, the feeling of freedom, and so on. This would be what the photograph may “connote” rather than the object it depicts. This may be called the “subject” of the photograph.

“Form” in art may be a bit elusive since it has several meanings in that context. One thing that we are all familiar with is the form of, say, a vase which has volume. This is to separate form from the shape like a leaf may have, which is the outline of the leaf, or even the vase for that matter. In this trilogy, I am talking about the form of the photograph itself not what is in it. When you pick up a piece of paper and draw on it some lines, you are creating the “form” of your drawing consisting of lines. Form refers to the structure of the photograph as the lines you drew referred to the structure of your drawing. The parts that relate to the work’s form are the “formal” elements and it is not the opposite of “informal” in this usage. In photography, there are some fundamental formal elements like line, shape, form (now referring to the volume of elements), tone, color, texture, rhythm, repetition, etc. When they are brought together in the photographic frame that creates a cohesive whole, they cling to one another, they form a sound structure or good composition.

We perceive the content, form, and technique as a result of our mental processes. Depending on many factors our perception of the photograph may be limited or rich. We all possess a certain body of knowledge, view of the world and politics, be in favor or opposed to some movements; “ism,” if you will; and may have a rich or limited visual vocabulary. Given a particular photograph, we may essentially see more or less which is also influenced by context (including time), the type of content, the formal elements, and the execution of the work.

Depending on the interaction between content, form, technique, and mind we may lean more towards content, form, or technique creating a perceived image floating in the pyramid. If the photograph depicts several terrified

children running toward the photographer, one being a naked girl against the backdrop of smoke and fire, we will most likely be drawn to the content both at the object and subject levels. We will see both the injured children (object) and the horrors of war (subject). I am sure you are viewing the image in your mind since it is one of the iconic photographs of war. Although the formal elements and technique or the photograph are also of very high-caliber, the content may pull the attention, and probably rightly so. By the way, here is the uncropped version which is less seen than the cropped version above. Does that change the way you see the photograph? Why?

Let’s look at another example, Two Pears by Paul Caponigro. We can clearly identify the pair of pears, but the object part of the content is overpowered by the form o

f the photograph. The almost, but not quite, white pears in a wooden bowl that seem to float in a sea of darkness. This exquisite tonal structure going from almost white to pure black with finely rendered gray tones are enough to carry the photograph. The positioning of the pears in a yin-yang fashion creates a rotational movement which happens comfortably in the confines of the round bowl. The texture and the fine detail of the bowl are the only real details but they create a well-executed juxtaposition of layers of elements with equally masterful technique. The fact that they are pears, the objective content, will take a back seat to the formal elements and excellent technical execution.

Not everything will fall into these extremes, of course, not much in life does. The purpose of picking the extremes was to offer a way to demonstrate how we can separate the content from the form and technique. Of course, what I wrote about both photographs are coming from the mental framework of “my mind” and may very well differ from yours. Nevertheless, the separation of content from form should be clearly visible in the examples.

Now, returning to the hypothetical example, photograph of a bird, if we see mainly the bird and talk more about the species, its habitat, and habits, where the photograph might be taken, and other similar details, I 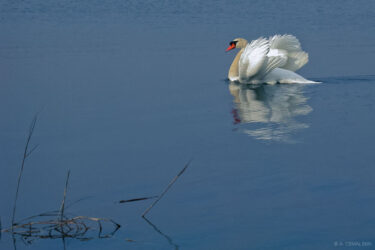 suggest that we would be “looking through” the photograph as if it is a window in an attempt to see the bird. However, we should realize that we are not looking at a bird but a photograph. Like all photographs, it is two-dimensional on the paper it is printed on. It has a frame which limits our vision to what the photographer decided to include. It has formal elements that relate to one another in a particular way. In other words, the photograph stops at the surface and presents us with the result of the photographer’s choices. This level of examining a photograph will allow us to experience the qualities of the photograph rather than being behind the camera taking that particular photograph. With the exception of purely abstract photography, it may not be possible to avoid focusing on the content, whatever that may be. What I am suggesting here is to not stop there but consider the formal elements and how they, along with the technique may enhance the experience of looking at photographs. Interestingly, this process is a self-feeding one. The more one engages in it the more one adds to the visual vocabulary, thus making it easier to see these qualities in the future.

If in the first challenge I posed for you to write the words after looking at a photograph you have mostly nouns like a rose, a bird; or even some adjectives like a red rose, or a lovely finch; you may want to stop and see the formal elements. Even if you are talking about the object in great detail, you may be missing the photograph as an object. That is the essence of looking at photographs to see, understand, and appreciate them. If you are looking at photographs to see “what they are” and quickly deciding whether you like them or not you may be missing a lot. As Brooks Jensen notes in his book Looking at Images, Minor White used to say that you cannot really see a photograph until you look at it for 30 minutes.

Nevin Bilginer, RIP
Next Post: Adobe Lightroom 6 Is Out