The first thing I noticed as we sat at the table was the pair of salt and pepper shakers. Sometimes very unlikely subjects capture our imagination, things that would not be ordinarily appealing to photograph may become interesting.

They were made of stainless steel with matching curves that made them fit together. I took some photographs of them at the table with my phone and later I asked the waiter if I could borrow a pair to photograph. He told us that they were popular among their patrons. In fact, the number of salt and pepper shakers diminished very rapidly for a while. Now, he said, they were under instruction to put them in the breadbasket when they were clearing the table before taking the coffee and dessert orders. The food was excellent, by the way!

Permission to Borrow the Shakers

A little later, the manager came and greeted me with my name and said hello in Turkish “Merhaba Cemal bey.” Clearly, he spoke only a few words in Turkish, but I replied in kind and asked how he knew my name and that I was Turkish. He smiled and said, “if you want to borrow a couple of my shakers, I need to know who you are.”

It turned out that one of our former neighbors was now a waiter there and he had told Dimitri, the manager, who I was. We talked, in English, about a couple of common friends and he said I could take the pair home to photograph. I promised that I would return them in a few weeks, and we shook hands and left.

The shakers stood on the desk for about two weeks while I thought of several ways to photograph them. They had highly polished, mirror-like surfaces and brushed and matte surfaces. The polished surfaces would reflect what was around them and the dull surfaces would mostly resist reflection. Yesterday I started taking photographs with the aid of a couple of colored manilla folders, with window light, ambient light, ambient light, and flash, … The surfaces had more scratches than I thought, but I was able to clean them in Photoshop.

I present to you a pair of salt and pepper shakers! Don’t overlook simple things to photograph. (They are made by American Metalcraft and are available from a restaurant supply store in case you are interested.) 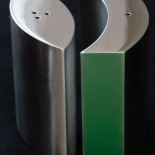 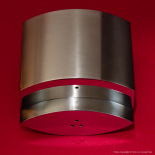 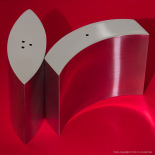