This post and all the photographs are a long-winded get-well card for my sister Binnaz. Get well soon, Binnaz. Jan and I are sending you our love and best wishes along with these photographs.

A little over seven years ago, I took a helicopter ride from Newport. There was no set destination, and my friend Dennis and I flew towards Westport and back, taking photographs as things emerged. You can see them in a dedicated portfolio on this site. That ride was a joint gift from my final capstone class students who totally surprised me and from my sister Binnaz, and brother in law and friend Ergun as a birthday gift.

This year, we took a similar ride with Jim and decided to do the same route. While we flew over the coastline and the salt marshes, I remembered the first ride my students, my sister, and Ergun. One can never guess exactly what one will see in these flights, as the vista changes by the tides, the time of the day, the winds, and the route the pilot decides to take. This time was no exception. The chief pilot Jeff of Birds Eye Helicopter Tours gave us a great flight.

We flew by the coast, watching the waves break on the sandy shore like lace. The waves created very intricate and interesting patterns against the underwater color and texture. Then a rock emerged as if a giant manta ray, with seaweed forming its long tail. The shoreline is filled with little islands in interesting shapes against the ever-changing color of the ocean.

Then, a series of large ripples came into view, as if formed by the careful hand of an artist. One ripple followed the other, gently breaking into layers of delicate bridal veils. Below the shallow and clear water, the bottom provided interesting backgrounds for the surface detail.

As we flew over the land following small rivers, the salt marshes exhibited the artistry of collaboration between nature and humans. The carefully cut channels on the marshes were done many decades ago by the Army Corps of Engineers to speed up the water drainage after high tide to minimize mosquito breeding grounds. Aside from those channels cut by the engineers, nature herself created others using its forces as if to please the viewers. The points where these little rivers joined the ocean formed interesting swirling patterns of water and sand.

The creations by the human touch ranged from settlements and towns to villas and mansions. The elaborate mansions are quite an integral part of Newport, but seeing them from the air gives them more of a jewel-like appearance. The boats of various kinds were sprinkled on the ocean, resembling the grains of salt on a dark tablecloth. Of course, there is the unavoidable presence of the two bridges that connect the mainland on the west to the islands of Jamestown and Newport, the Jamestown Bridge and Claiborne Pell Bridge, also known as the Newport Bridge.

In the following collections, you will see the photographs I took with two cameras. One was a regular DSLR, a Canon 5D Mark IV, and the other was a Canon M5 converted to take infrared photographs. The last two collections are infrared photographs with their false colors. I decided to keep the false-color versions instead of converting them to monochrome because the general blue presence fit the scenery quite well. And, the yellowish foliage, although technically incorrect, suits the season as if I photographed fall foliage.

If you are planning a similar experience, here are the things I planned for and one thing I totally overlooked! The following are not in any particular order.

Now, the photographs (if you have really read this far, thank you!) 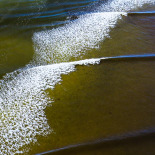 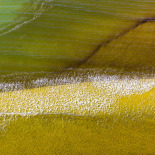 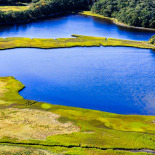 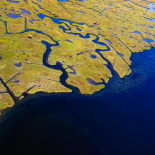 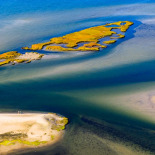 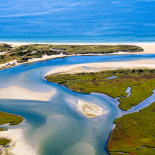 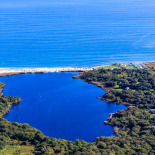 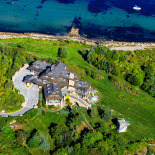 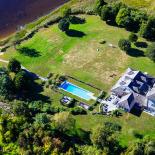 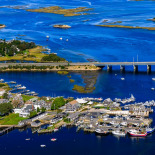 Gallery 4: The Human Touch in Infrared 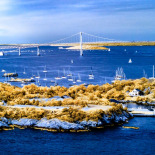 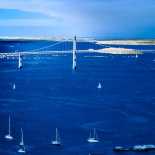 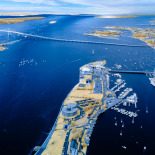 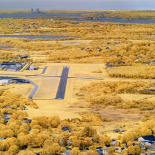 Gallery 5: The Shoreline in Infrared 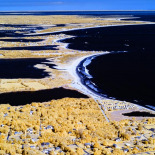