I am back on the State side and almost fully acclimated to the local time and caught up with things that had to be done right away. I would like to catch up with the posts that will wrap up the London trip.

On June 1 we visited the National Gallery to see Turner Inspired In the Light of Claude on its last few days before it ended. It was a very rich exhibit, which is no surprise since Turner’s bequest was the largest donation to the National Gallery. The exhibited work, the paintings, the sketch books, and the accompanying information were quite impressive and highly enjoyable.

We left the gallery to go to the National Portrait Gallery around the corner after a lunch at the National Cafe. On the way we watched briefly a performer doing things that hurt me by simply watching him! If you look at the photographs, especially the last few, you will understand what I mean. The lunch at the National Cafe was very nice, I especially liked their slightly frothy coffee. Afterwards we went to the National Portrait Gallery and very selectively moved to find a photo exhibit. In the immense place that proved to be a bit challenging even after we asked the staff a few times. In the end we found the photo exhibits, enjoyed them and moved on.

Rested in the afternoon, we headed off to the Royal Albert Hall to listen to Elgar. The location was quite interesting with a cluster of Victorian buildings and a newly restored Albert Memorial on the other side of the road. The concert hall is elliptical, almost circular, and the seating inside follows the same contours, even behind the orchestra up to where the huge organ was installed.. We had tickets to a loggia seats and Ergun ordered three glasses of champagne and a small container of olives to be ready at the intermission. We found our loggia and took our seats. Elgar’s music seemed to me “bombastic without majestic” but the space was impressive. At the intermission we walked out, found the table with his name with the drinks and enjoyed the champagne and munched on the olives, with our fingers.

After the intermission the music resumed, toward the end of the first piece there was a mild commotion on the other side with people shuffling rapidly. I saw a man grabbing another person from under the arms and dragging to a little more open space. There they seemed to lay the person on the floor and got more help. A stretcher appeared and eventually they got the person out on it. All the while the pomp and circumstance kept on playing. After the concert we waited for a while to find a taxi then made a pit stop at Carluccio’s Restaurant for a late supper.

The next day I was a bit tired and decided to stay in. I rested while Binnaz and Ergun went to the British Film Institute to look at their DVD collection and returned with a dozen or so DVDs. In mid afternoon we all went out and walked to the Sloane Square, I stayed around the square and they walked down the road a bit further. I walked around the small park, stepped in to the small shopping arcade with small boutique shops, then walked back to the flat. I took a walk round the block where Phoenix House is located and took photographs from the ground level of the buildings we see from the window on the fifth floor. A very nice neighborhood indeed. Later we ate supper at home and watched one of the DVDs, a documentary on Brazilian popular music style called “choro”. 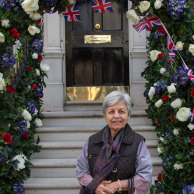 June 3, 2012 was the diamond jubilee of the Queen of England. Binnaz and Ergun took a walk and returned a bit wet, rain had started unexpectedly. After drying off we all went out to Covent Garden, a large arcade with stores and flea market type stands. Interesting place but the weather was not that great and we walked in and around the arcade and stopped at a pub for lunch. That evening we met David and Nevsal for dinner at Al Hamra Lebanese restaurant. Taxi drivers were not willing to go in the direction we wanted to go for fear that they could get caught in traffic. We ended up taking number 22 bus which was quite comfortable and quick. On top of that, there was no traffic to speak of. After getting off the bus we walked a couple of blocks, but these were short blocks and we did not get caught in rain. The dinner was nice, I kidded David about Elgar being “bombastic without being majestic”, we enjoyed the dinner with a variety of small dishes and a mixed kabob we all shared. A very nice way to end a great vacation.

The next morning the bellhop took my luggage downstairs. Ergun had arranged for a private taxi to take me to the airport. The “private taxi” was a Mercedes E-350 with a well-dressed driver. They put my luggage in the car, we bid farewell to each other, and soon I was traveling in style on the freeway to the Heathrow Airport to return home.