Harris Avenue runs by the rail tracks in Providence. It has very little traffic and even in the days of Covid-19, it is a reasonably safe place to visit. Jan and I were the only pedestrians on the street and very few cars went by while we photographed the same wall once more.

The Wall on Harris Avenue

Some faces on the wall have faded, even more, paint running like bad make-up. A few large pieces remained, albeit with less vivid colors. And, there were new additions to the collection on the wall, or Off The Wall as I called the post last time.

The weather was iffy, overly cloudy and the threat of rain lingered in the back of our minds all the while. We walked up and down the wall picking our frames. I took several panoramic views for later stitching but forgot to take a large number of the same view shots for an experiment of stacking them for super-res.

After we returned home, I rushed back to Harris Avenue to take 20 or so shots of the same frame but later I found the idea lacking, or maybe my skill in implementing it. The expected super-resolution did not materialize in a meaningful manner.

As I got in the car a second time around, it started to sprinkle. I still managed to get home just a little ahead of the rain.

Here are some selections from Jan’s collection. 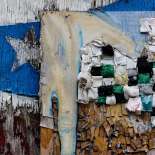 And, some of mine. Click to view the larger, in some cases much larger photographs.