I have exhibited my photographs in many different venues and published some as limited or open edition folios. The exposure of my work is summarized on this page with detailed information for each being available on their dedicated pages. I hope that you enjoy viewing them as much as I enjoyed photographing them. The brief descriptions you see to the right are augmented by a collection of the photographs exhibited along with other supporting materials like slide shows and catalogs when available. In addition to having exhibited my photographs as collections, I have received other awards and produced unique works. You will see them among the list of exhibits with brief explanations and links to works when possible. Besides what is listed here, I have many commercial works published in national and international magazines, used in promotions, etc.

August 2019
The International Lens Magazine: Dance
Photographs, taken from the window of our moving train from Istanbul to Adana. A 23-hour journey like time travel to my youth.

The Fields of Color, Lens Magazine

September 2017
The International Lens Magazine: 3 Years Big Collection
Photographs, taken from a helicopter over the Great Salt Lake spreading the colors that emanate from the great lake.

March 1 – April 3, 2016
Central Congregational Church Gallery, Providence
A collection of photographs of trees from the Aegean coast of Turkey. Most of the collection was devoted to olive trees, a native of Ayvalik and vicinity. Other photographs from Mt. Ida hills rounded up the collection.

Beyond Choreography: Visual Interpretation Of Movement

September 1–October 28, 2016, Art League Of Rhode Island Juried Exhibit, Veterans Memorial Auditorium Art Gallery
Two photographs accepted to the juried show and one received the Artistic Director’s award. Read more about the exhibit and my two afternoons of minding the gallery in two posts, Exhibit Opening and Pictures At An Exhibition posts.

Trees of the Aegean Photography Exhibit

April 21 – May 14, 2016
Peter Miller Fine Art Gallery, Providence
A collection of photographs of trees from the Aegean coast of Turkey. Most of the collection was devoted to olive trees, a native of Ayvalik and vicinity. Other photographs from Mt. Ida hills rounded up the collection.

November 5 – December 3, 2014
A collection of photographs from one of the largest and one of the smallest churches in Istanbul. They greet visitors with their unique qualities. Central Congregational Church, 296 Angell Street, Providence, RI. Reception and gallery talk: November 7, 2014, 5:30 – 7:30 PM. [Read more]

July 2014
LensCulture honored me by selecting a second collection I had in my works, Disarmed, as editor’s choice.

July 2014
Awarded the title Master Member (MNEC) by the New England Camera Club Council: This honor is awarded for your dedicated service to the Photographic Society of Rhode Island, and the Film Photographers Association as a lecturer, mentor, and educator, for your contributions to NECCC Conferences as a workshop leader and program presenter, for your publications in LensWork Magazine, and for your work in creating a ballet inspired by your flower photography.

May 2014
I was honored by my Infrared Earthscapes collection of photographs being selected as one of Editor’s Choice in Landscape category.

April 2014
The invitation said “So why are you receiving this invitation now? Every month, we identify a group of talented photographers whose work we would love to see on our site. We would personally be delighted if you joined our invitation-only network.” [Read More] 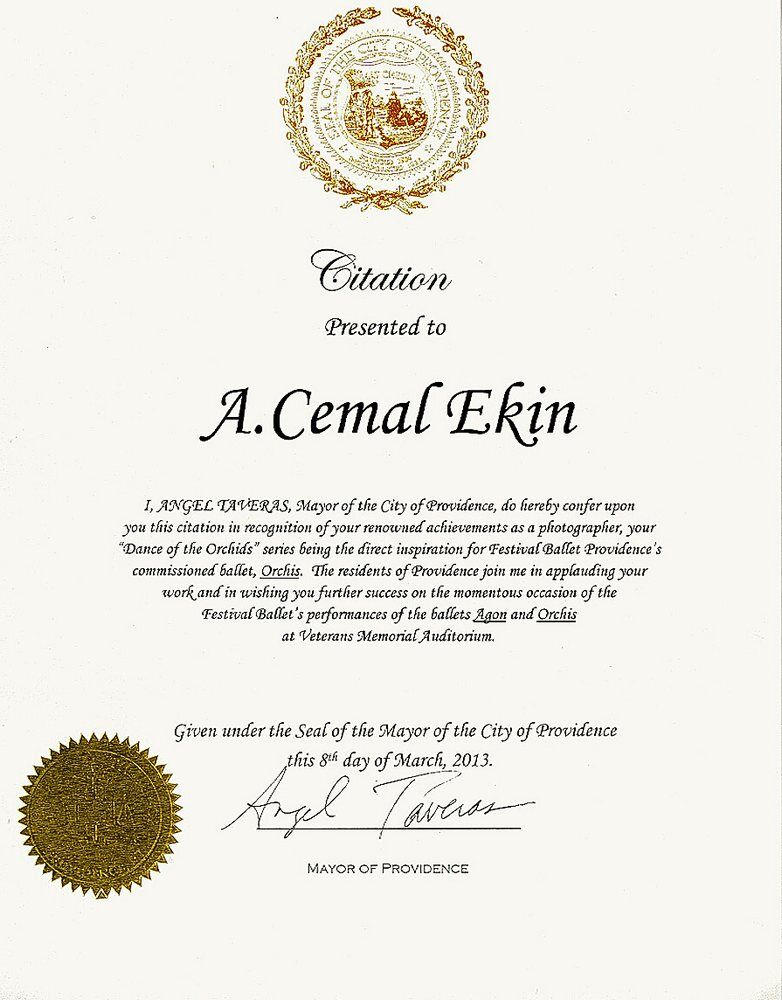 March 2013
“I, ANGEL TAVERAS, Mayor the City of Providence, do hereby confer upon you this citation in recognition of your renowned achievements as a photographer, your “Dance of the Orchids” series being the direct inspiration for Festival Ballet Providence’s commissioned ballet, Orchis. The residents of Providence join me in applauding your work and in wishing you further success on the momentous occasion of the Festival Ballet’s performance of the ballets Agon and Orchis at Veterans Memorial Auditorium.”

March 2014
March 2013
An original ballet, Orchis, was commissioned by Festival Ballet Providence based on a collection of my dried orchid blossoms, then titled “Dance of the Orchids“. The choreography by Viktor Plotnikov and music score by Sonya Belosueava completed the collaborative effort.

2013
For the massive volume of “Calligraphy and Architecture in the Muslim World,” the publisher acquired a one-time use right for one of the photographs for its cover.

2012
Honorable Mention in Prix De La Photographie Paris with Fields of Color. The “Prix de Ia Photographie Paris” (Px3) strives to promote the appreciation of photography, to discover emerging talent, and introduce photographers from around the world to the artistic community of Paris. Read More

2012
The premier art and art history collection repository Artstor acquired 50+ photographs from the Hagia Sophia Collection. The photographs will be available to scholars from colleges, universities, and other authorized organizations for research purposes.

Issue #97, November – December 2011
Over 70 photographs from the Infrared Earthscapes Collection were published in the LensWork Extended Edition with extensive audio interview and commentaries.

Touching The History: Photographs From The Dome Of Hagia Sophia

I had the privilege to see the Great Church, Hagia Sophia from the vantage point of its central dome. Riding the elevator to the top of the scaffolding erected for restoration, I actually touched the center of the dome and spent hours in that magnificent space and outside on the roof. This series of exhibits displayed photographs taken from the extraordinary vantage points, probably not seen before. The first exhibit excluded some of the photographs that exhibit 2 and 3 included. This was mainly due to space constraints and logistics. You can view the collection of the photographs in a special gallery. There is a limited edition folio of photographs as well as a booklet that includes all the photographs with a short essay.

July 4- July 30, 2008
At the Mathewson Street United Methodist Church in Providence, RI. It was a continuation of the one with the same name that showed in 2007 but richer with many more photographs both in color and monochrome. Gallery talk on July 17, 2008, at 6:00 PM.

April 10 – May 8, 2007
Lifespan invited me to show my photographs in their exhibit space between two of the largest hospitals in Rhode Island. Due to the limited space, I was able to show only 18 photographs chosen to show three images from a given area. The exhibit was seen by thousands of people as they went from one building to the other.

January 13 – February 12, 2004
Hunt-Cavanaugh Art Gallery of Providence College. The exhibit featured 36 of my photographs and was very well received. Many of the photographs I exhibited were sold, some in multiple copies.