The long hot summer started to fade around mid-August. The temperature dropped, lower humidity, more breeze in the air made a few more short walks possible for me in early fall. I enjoyed looking in all directions, including up and down to see interesting subjects, from a dove (or a pigeon, I cannot tell them apart) sitting high on power lines to the random patterns created on the pavement.

The summer heat must have suffocated the flowers as they now seemed to have taken a fresh breath and spread their petals, particularly visible on the rose bushes high and low. Although there are several pink roses in the collection below, they are from different neighbors’ yards. Distant cousins, so to speak! They also show that I do stop and smell the roses, or rest my aching leg, and catch my breath!

I have taken many photographs of the black lines on the asphalt pavements probably created by repair crews to cover the cracks. For some reason, these random brushstrokes extend beyond the cracks and sometimes appear where there are no cracks at all. That makes them all the more interesting. I call them tar doodles and one day I may put them together in a post. Also, don’t ignore the shapes and forms created by the cracks and erosions. Do you see a minor road sphynx in one photograph?

There is a tree at the corner of Clearwater and Osceola Sts. Every time I look at it I see the head of a dragon emerging and biting the leg of the tree. Luckily, the dragon is imaginary but the image will drag you on, or in! Not too far from this one is another one that got cut down a few years ago. They have not ground the tree trunk and it offers interesting views, including the long crack formed in the middle. Early fall in more ways than one! The micro canyon!

Walk a little more on Osceola St. you will come to an area covered by wild ivy and other bushes. A little while ago, the owners of the property who live in the house next to the jungle had a path cleared out and covered it with wood chips. It is a path that goes nowhere.

Probably to prevent people from roaming inside, they put a very flimsy wire gate that does not even stretch the full width, more a message than prevention. The delicate gate against wild growth behind it grabs my fancy partly because it reminds me of the Nasreddin Hodja’s Tomb surrounded by six columns and an equally flimsy gate between only the two. Everything else is open!

On a recent early fall walk, I saw a dandelion with a full head of hair (easy for me to notice!) As low as it was to the ground, I managed to capture a few frames with slightly different focus points. Later, when I stacked them in Photoshop and merged them into one I realized how lucky I was to capture three frames that yielded a fully focused dandelion head. Even Dennis approved! He has written quite a bit on the subject.

Many embedded signs on the sidewalks remind the passersby of its history. One such sign was in quite good shape and even older than me by a few years! How could I ignore its call?

And the foliage is reflecting great fall hues already. I captured a patch of fallen leaves on our street at the corner of Eleanor St. With a little camera movement, the colorful leaves became patches of color.

Here are some photographs from the middle of August to the beginning of October. They are in chronological order rather than grouped by subject similarities. My attention is not that orderly, especially with everything else going on in the country! 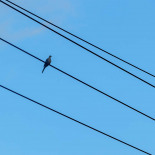