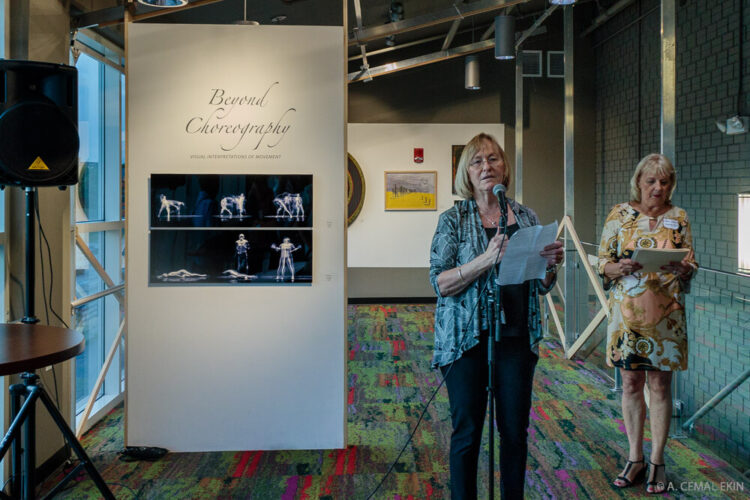 Today was the opening reception of the Beyond Choreography: Visual Interpretation of Movement juried exhibit. Art League RI has gathered a strong collection of art submitted by New England artists. The Veterans Auditorium also had an open house to showcase their renovations. Jan and I arrived a little early on a nice sunny day, parked on the street on the State House side and slowly walked to the auditorium.

We were greeted by Dylan from Festival Ballet, he was inside the ticketing booth. Misha greeted us in the lobby and we chatted with him and Dylan for a while. Then, we took the elevator to the gallery level. As we entered the gallery my two pieces greeted us under the exhibit marquee, quite pleasing indeed. While Jan was taking photographs of me in front of the photographs, we met Ken Steinkamp, one of the VP’s of the Art League. He told us how well my work fitted the theme of the exhibit and the space below the banner.

After chatting with Ken, we started walking down the hall looking at the other works on the walls. There were interesting pieces in mostly painting medium except for a few additional photographs. Our friends started to show up slowly and a little later the ALRI president opened the evening by acknowledging all those who worked tirelessly to make the show possible, including the jurors of course. Then the gallery committee chair explained the program and invited Misha, the artistic director of Festival Ballet Providence.

Misha said words that highlighted the importance of the arts and various art forms working together. He then talked about this specific exhibit and announced two winners of the FBP Artistic Director Awards. It was pleasing and surprising to be one of the two recipients. Then the president announced the grand prize winner for her painting, a nice piece reminiscent of André Kertesz photographs of chairs of Paris series.

We chatted with friends who came to see the show and as they slowly moved on, so did we!

Here are my two accepted images and the one at the bottom is the award winner.

Here are some photographs from the evening: