I have been doing infrared photography for a while, which started with a Canon G7 point-and-shoot converted for this purpose. With that camera, I took a series of photographs from the window of commercial flights between Providence and Salt Lake City over four years. Eventually, that collection, Infrared Earthscapes, got published in the LensWork Magazine in December 2011.

Just a little before the publication of my Infrared Earthscapes collection, I replaced my infrared camera with a Canon Rebel T2i so that I could use different lenses on it, and that camera gave me many photographs until late last year. My main challenges with the first one were the small image size and the lack of raw format images. The second one produced a different challenge, this time with the focusing process. DSLR cameras use a secondary light path for focusing unless the live view is used. That proved to be difficult to use most of the time because the live view is very difficult to see outdoors, let alone carefully focus.

I decided to replace my last infrared camera with a mirrorless one since the focus is always done on the actual image capturing sensor and is as precise as it needs to be. The logical choice for me was a Canon M5 since I had been using one since its introduction. I found a refurbished unit in the Canon store at a good price and purchased it a couple of months ago.

I had the other two cameras converted to infrared at LifePixel and was generally satisfied with the results. So, I decided to use their services again. An unfortunate mistake on their part, the battery lid required excessive force to open and close, caused me to send the camera back for service. They found that one screw was loose! I am not sure how, but they left it not properly tightened. So, the second service was easy but cost me $60 extra in shipping charges. Now, all is good.

(Note on 5/25/2018: I guess LifePixel was expecting me not to mention this snafu on their site, they strangely refunded $5 to me, probably triggered by my review in which I mentioned the extra shipping cost. Petty! And, I no longer have faith in their work or judgment.)

(Note on 5/28/2018: The principal of LifePixel contacted me via e-mail to set up a phone appointment, which we did. Due to some personal reasons, he missed it twice, and on the third time, he offered his apologies for not handling the matter better. I told him that I was not asking for a refund but simply narrating the story with an ending “Now, all is good.” He also told me that they refunded my extra shipping cost of $60 as a gesture of goodwill. Had they not made that $5 refund, all would still be good. I accepted his apology, goodwill will take time. I have donated the $60 to RI Center for Photographic Arts.)

I have been trying to take some experimental photographs since I got the camera back as the weather and my health permitted. In the meantime, the new release of the Lightroom Classic CC and Adobe Camera Raw added features that made processing infrared images a lot easier than before, as I wrote in a recent post. Here, I am sharing some photographs that I took back in March in Roger Williams Park and this afternoon at the Garden City Shopping Center. I thank the staff of the Pottery Barn store for their cooperation and for allowing me to photograph in their store.

You will find a mix of photographs in terms of subject matter and processing. Take them as a result of my experiments in infrared photography. Keep in mind that even when the photograph appears in color and some parts may even look normal, they are false colors. That’s the nature of infrared photography! 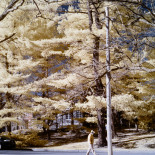 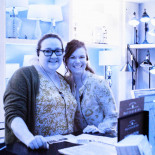 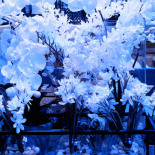 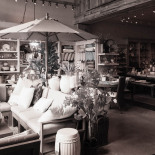