A Foggy Morning in Jamestown

Yesterday morning Jim invited me to go down to Jamestown and we left around 10:30 AM. After the rain we had, the morning was a bit chilly and the water was foggy. As we drove over the Jamestown Bridge I could see the fog covering some parts of the vista and towards the end, as we neared the Newport Bridge the fog was hiding the tops of its towers.

Jamestown is a quaint town on one of the large islands in Narragansett Bay, Conanicut Island. It is connected to the mainland via the Jamestown Verrazzano Bridge and to Newport via the Newport Pell Bridge. It has largely maintained its quaint atmosphere by adhering to rules for building, construction, and business operations allowed. It is a popular tourist destination in summer and has a resident population of about 5,500. The famous town of Newport is also on an island, Aquidneck Island. Other than these two large islands, Rhode Island has many other small ones scattered in the bay. That is the reason for such a small state like Rhode Island, 37 miles wide and 48 miles long has a shoreline of 384 miles!

When in Jamestown, we stopped at a boatyard with quite a few boats on jacks and walked around a bit. The other side was hard to see because of the fog. As we spent time there taking photographs, the fog started to lift and the blue sky started to show. A man we met there, possibly the owner of the boatyard told us that he had heard from some offshore fishermen that there was an earthquake under water. We did not feel anything on land, of course.

We drove around, made a brief stop at Beavertail Lighthouse, and a couple of other places before arriving at the East Ferry Deli. It is a favorite lunch spot with excellent sandwiches and a great view of the Newport Bridge. After a quick lunch, we walked down to the pier where I took the series of photographs for the panorama view of the bridge. The final stitched image is a whopping 150-megapixel image! While at the pier, I found interesting subjects looking down, one under the rippling water, one of a few colorful lids on the ground, one in a small pool of water, and I will sit on the other! By this time the weather had cleared but left interesting cloud structures behind the bridge.

Come, see parts of Jamestown with me. 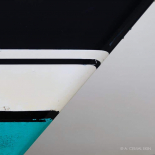 From Andre Kertesz’s Window
Next Post: From Many To One, Multiple Exposure Photography